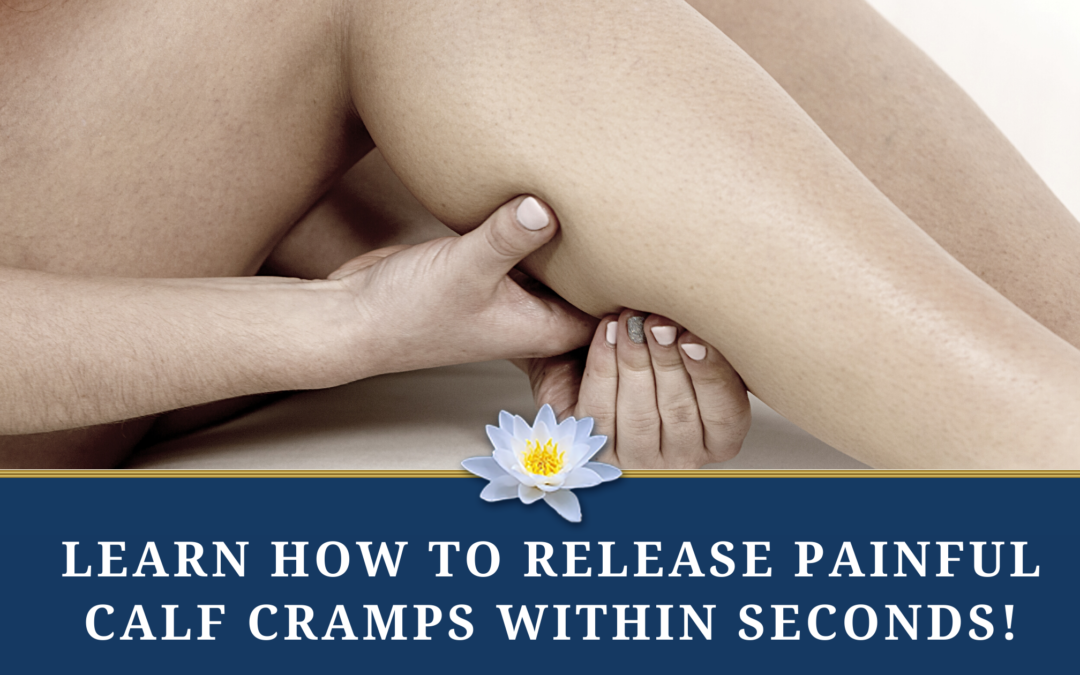 When I was pregnant with my son, I experienced calf cramps nearly every single night in my third trimester.  In addition to being highly disruptive to my sleep, calf cramps are seriously painful!  Luckily, having 15 years of human anatomy knowledge, I knew what to do to relieve my calf cramps in seconds.  It isn’t rocket science, but it is counterintuitive.

The number one cause of calf cramps is dehydration followed by diabetes.  The recommended amount of water intake per day is eight, 8 ounce glasses of water.  However, this number increases by one for every 8 ounces of coffee, caffeinated tea or alcoholic beverage you drink.

In addition, we require more water depending on how high in elevation we live.  Thus, Colorado residents need about as many ounces as their body weight in water per day.  Most people, including myself, are not achieving that, therefore, calf cramps can be more common here. 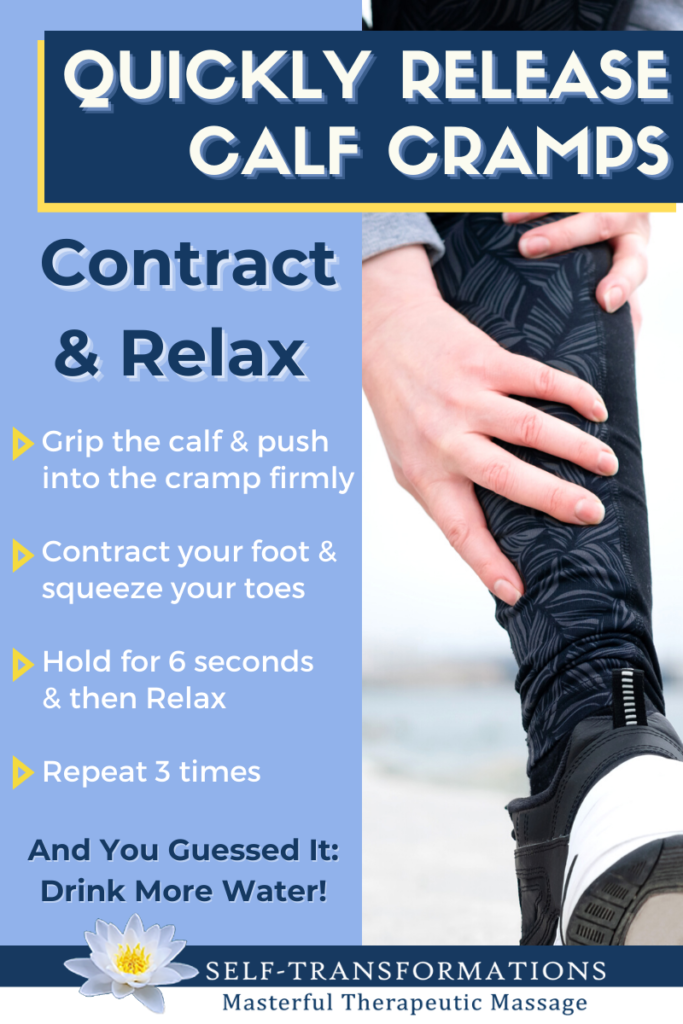 How to Quickly Relieve Painful Calf Cramps in SECONDS?

What do you think you should do for a calf cramp?  Most people would say, “stretch the calf.”  Even though that works, it takes much, much longer and although it can eventually release the cramp, the residual pain can last many minutes to a half hour.

Instead, when you are unexpectedly in the grip of a painful calf cramp use this therapeutic self-massage technique to quickly target and relieve the discomfort.

Grip the calf and push into the cramp firmly. Really, make your cramp worse by pushing your toes into a wall, a tennis ball or if the cramp strikes at night, your bedpost will work too!

Contract your foot and squeeze your toes. Push into the cramp and hold this contraction for at least six seconds and then relax.  Repeat the contract & release again at least three times.

After 3 cycles of this contract-relax self massage technique, your calf muscles should release its painful cramp and discomfort should easy by at least 50% if not entirely.  And as you guessed, be sure to drink more water too!

Why does this self massage technique work so immediately and completely to relieve painful calf cramps?

It works because it works with your brain and nervous system.  When your calf cramps, in that moment your brain is likely not registering that anything is wrong.  The brain is neutral to the cramp.  However, when you push into the cramp and make it worse, you are sending active signals to your brain essentially saying, “hey, pay attention to me, a cramp is happening.”  The over exaggeration of the contraction finally registers in your brain as problematic and your nervous system kicks in and finally releases the cramp.

Other Uses of this Powerful Therapeutic Self Massage Technique

You can use this technique of contract-relax for neck spasms, stomach cramps or a thigh cramp.  Essentially any time a cramp happens suddenly and continues, chances are the brain is not registering the issue.  Thus, contracting further into the cramp will get the brain to notice and then release.  This technique is wonderful for the times when you wake up with a neck cramp from sleeping wrong or when you get a stitch in your side while running but is much less effective on chronic conditions that have been building over time.

When those painful calf cramps hit you unexpectedly, remember to push into the cramp, hold for 6 seconds, release and repeat for a total of 3 times or more and your cramp/spasm should release at least 50% in seconds.