The Republic of Kiribati

My awakened journey truly began in 2002, after making the decision to serve as a Peace Corps Volunteer on a small island nation called the Republic of Kiribati (pronounced Kiri-bus).  Kiribati is comprised of 33 coral reef atolls and one raised coral island in the Pacific Ocean straddling the International Date Line and the equator. Collectively, the total land area is the size of Rhode Island yet is dispersed over an area that spans roughly the length of the Continental USA. To learn more about Kiribati and its neighboring islands visit Wikipedia’s webpage: http://en.wikipedia.org/wiki/Kiribati

At the ripe age of 21, and the youngest Peace Corps volunteer of the group, my first impression of Kiribati was that it suffered similar problems as other underprivileged and underdeveloped nations.  Upon arrival, we witnessed litter laced streets in urban areas that had no serviceable central sewer or water systems. There were few paying jobs and infant mortality and illiteracy were high. Immediately, I was determined to “help these poor people” though in the end, this beautiful culture and its humble people gave me more than I ever could have imagined!

For every obvious problem Kiribati people (I-Kiribati’s) faced that Western intervention could solve, they have equally incredible gifts to give us.  Kiribati has no orphanages, no retirement homes, and no assisted living facilities. Guns are forbidden and illegal, even for the police to carry.  The mentally disabled, old and needy are absorbed into society and treated with dignity by their community.  Neighbors know each other and share household goods among one another.  The concept of “mine” simply doesn’t exist as it does in the West. 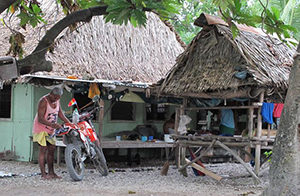 In the West, we often say, “this is my bicycle, my hammer, or my career,” and these things remain ours whether in our possession or not.  I-Kiribati’s think and speak differently of private possessions.  It is “my bicycle” only when the bicycle is in my possession whether or not I bought it.  The bicycle may indeed belong to the neighbor and everyone knows the neighbor purchased the bicycle, yet it is not owned by that neighbor with “my” in mind. When the owner of the bicycle needs it back, he will go to the borrower and say, “May I have your bike back.”

I-Kiribati’s land and people are their riches. This ideal is reflected and reinforced in the very fabric of their culture and was completely foreign to me. In truth, I starved for caring, inclusion, and togetherness, but initially was ignorant to even knowing I needed this genuine connection.  Wanting to “be a somebody” was more culturally appropriate and reinforced in my Western upbringing than knowing and caring for my neighbors. This was the exact opposite in Kiribati.

Intense digestive issues were common for Peace Corps Volunteers. I sometimes laid helpless in my thatched-roof hut, fever-ridden, without any creature comforts, feeling extremely isolated and alone. During one of these episodes, while living on the small island of Beru, three young women my age stopped by – Burati, who I had befriended a few weeks earlier, arrived with two others who were strangers, Katrina and Taea. 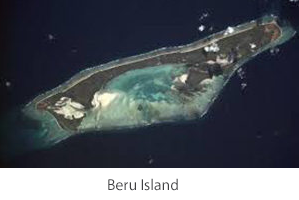 Without speaking a single word, Burati began to boil water for me.  Taea went to the well to get cold water and Katrina began cooking for me.  After the water was boiled, Burati filled a large basin with a mixture of the hot and cold water, proceeded to help me get out of the fever-soaked clothing and into the basin. She then poured the water over my head ever so tenderly as if I were her newborn baby.  They spent the entire afternoon with me, nurturing me, treating me, (a mere stranger), as if I were family. I was too sick to resist or feel embarrassed, so I surrendered.

This is just one of the countless examples of I-Kiribati’s amazing inclusion. It took many months to integrate that experience and understand how profoundly affected I was. Of course, I had been sick before but never had I been shown so much attention, care, and genuine kindness by mere strangers!  They received no monetary compensation for their time and effort, they came simply because they heard of my illness and wanted to help.  I-Kiribati’s help each other regardless of status, income level, race, gender, or profession.  The society thrives because they genuinely care for one another. 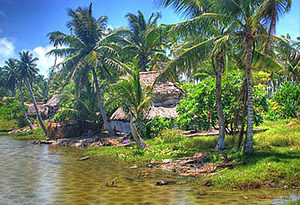 The take-home – If Western resources, education, and sanitation could meet the open-hearted, simplistic community values of Kiribati and countries like it, Peace on Earth could become a viable reality. When the best of the East and West come together we will begin to see a world filled with beauty and harmony.  We will thrive only when our human diversity is embraced and our limitations understood and transformed.

Needless to say, my goals were profoundly altered upon returning home. No longer was I driven by the Western “status quo,” to achieve.  Rather than pursuing a graduate degree, buying my dream house, and becoming a “somebody” all I wanted to do was transform and balance these extreme polarities in our collective human fabric.  It was clear, I needed to begin with myself.  Going to massage school in Ashland, Oregon was the next step.

Without knowing it, simply by living their humble lives in a majestic and isolated corner of the world, I-Kiribati’s initiated my conscious life.  They gave me new eyes to see with and an ability to begin to live life from my heart.  I am in debt to them and profoundly grateful! To this day, I still tear up when remembering those precious 21 months in Kiribati.

(Thank you so very much for the land of Kiribati)